This post is brought to you by Disney.
Ready for some Marvel, Disney and Lucasfilm news? Of course you are!

Once upon a time I was invited to D23 Expo and I had only two wishes. To see Johnny Depp and Harrison Ford take the stage. Then in one magical D23 presentation, all of my wishes came true. 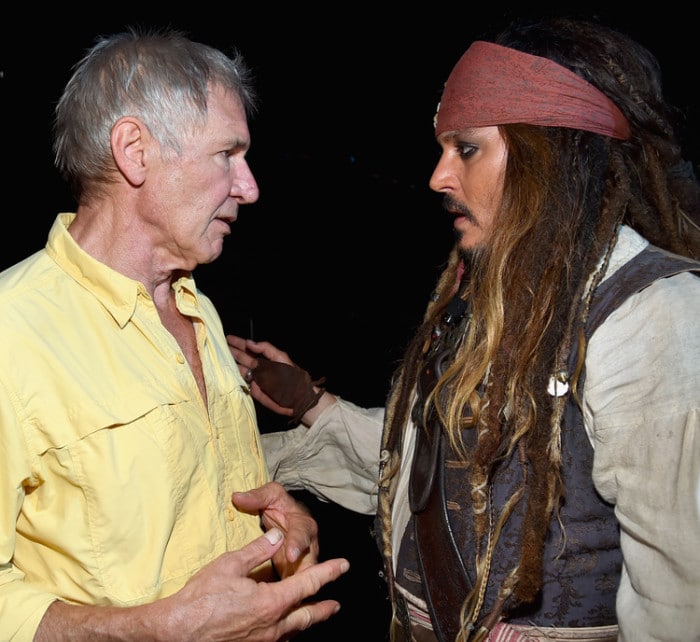 But my brain works best when I try to take things in a logical order, so I’ll have to circle back to this. For now we’ll just go in the presentation order. I promise I’m not playing favorites. 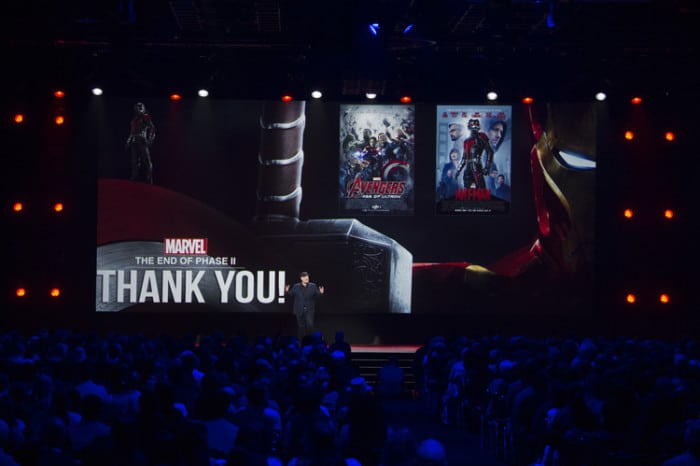 Kevin Feige took the stage to talk about what’s we can expect from Phase Three in the Marvel Cinematic Universe. 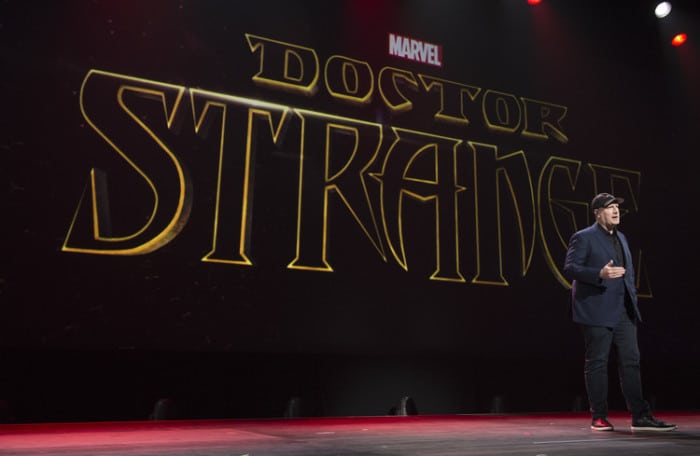 During our Avengers interviews earlier in the year, Kevin Feige briefly mentioned the filming dates for Doctor Strange. Benedict Cumberbatch fans then proceeded to break Twitter after it was announced. At D23 EXPO we got a special video greeting from Benedict and a pre-production sneak peek at what we can expect from Doctor Strange. Those hints that the Quantum Realm from Ant-Man are a clue look to be totally true. 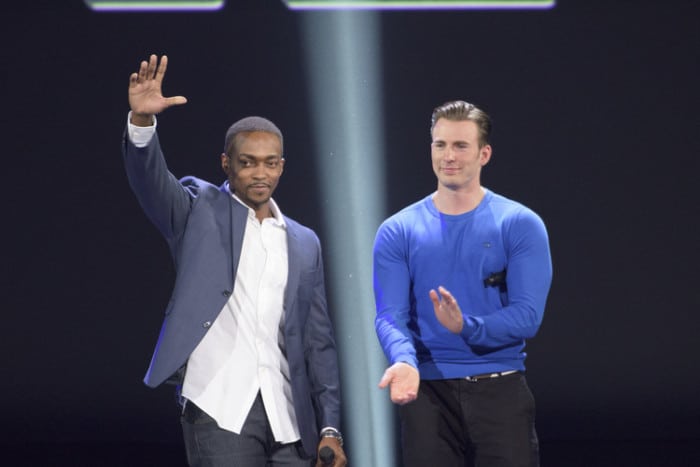 Civil War picks up where Age Of Ultron left off. And if you saw Ant-Man, you know we have more Bucky on the way. Chris Evans and Anthony Mackie introduced new footage from the film, including a special D23 EXPO Easter egg. Also, please take a moment to admire Chris Evans’ biceps. They are everything.

And sorry, no news on Guardians 2. Or Thor 3. Or Captain Marvel. The reporter in front of me was convinced we’d find out who was going to play Captain Marvel, but no news. Yet.

Chris Pine and his gorgeous eyes helped introduce The Finest Hours. Based on a true story, The Finest Hours shows the most daring rescue mission in the history of the Coast Guard. Also staring Casey Affleck, Ben Foster, Holliday Grainger, John Ortiz and Eric Bana, The Finest Hours opens in theaters on January 29th, 2016. 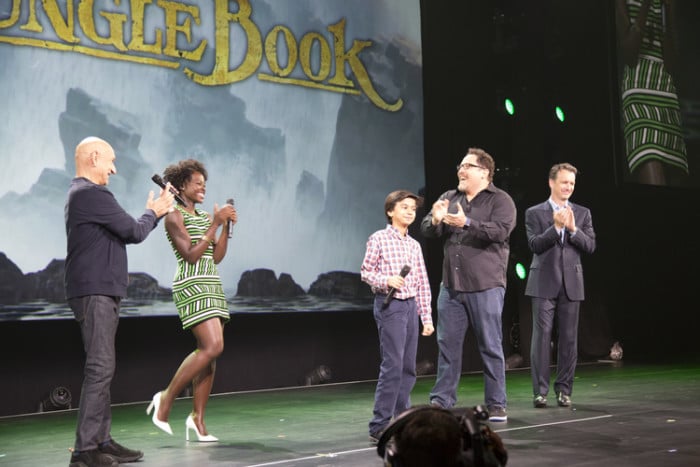 We got an early look-along with the stars-at The Jungle Book and the film looks seriously amazing. It’s clear that they know this film is being made for generations who grew up with the book and original animated classic along with their children and they’re taking the responsibility seriously. Watching newcomer Neel Sethi’s reaction to the clip was pretty darn adorable. Ben Kingsley, the voice of Bagheera and  Lupita Nyong’o, who voices Raksha also joined director Jon Favreau on stage.

Alice Through The Looking Glass 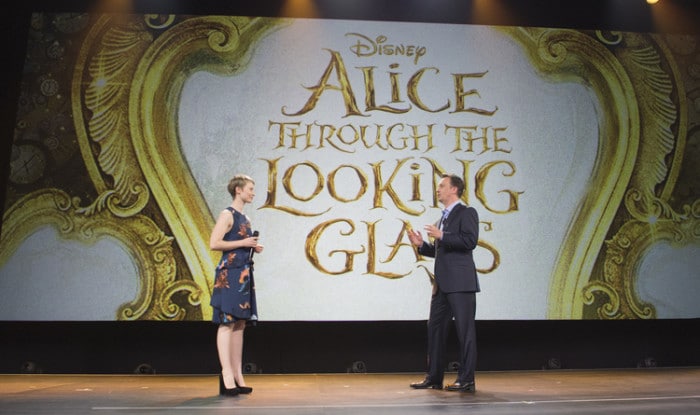 I’m relatively Tim Burton obsessed, so I was a little sad to find out he’s not directing Alice Through The Looking Glass. After seeing the new clip at D23 EXPO, I’m not worried. (And he’s still signed on as a producer.) Directed by James Bobin, Alice Through The Looking Glass returns to Underland as Alice travels back in time to save the Mad Hatter. The film brings back Mia Wasikowska, Johnny Depp, Anne Hathaway, Helena Bonham Carter and the voices of Alan Rickman, Stephen Fry, Michael Sheen and Timothy Spall. We’ll also get introduced to Zanik Hightopp-the Mad Hatter’s father-played by Rhys Ifans, and Time himself-brought to life by Sacha Baron Cohen.

Alice Through The Looking Glass opens in theaters on May 27, 2016. 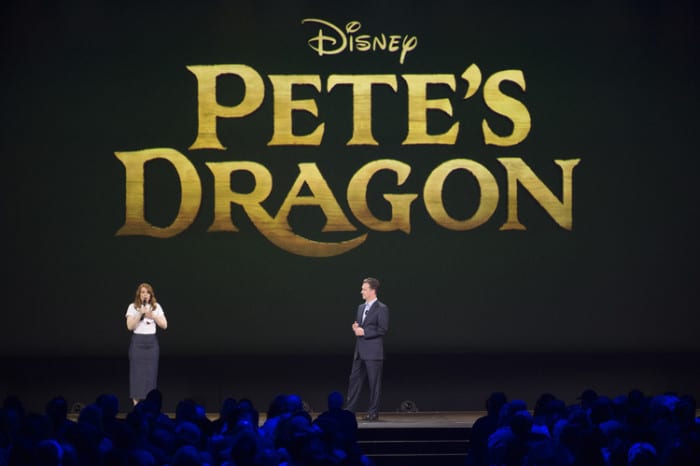 One of the saddest things I’ve ever experienced was watching the Main Street Electrical Parade a few years ago and hearing someone beside me say, “Who’s that?” when Pete and Elliot rode by. That is not okay! Luckily a new generation will be introduced to Pete’s Dragon when it hits theaters on August 12,2016. (And hopefully they’ll revisit the original, too.) 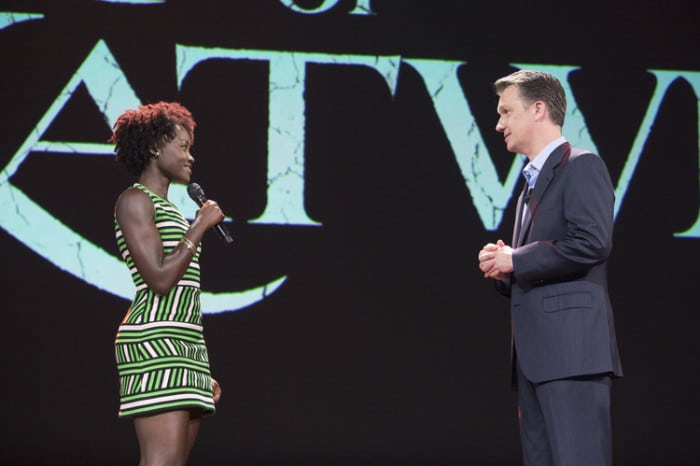 Sean Bailey brought Lupita Nyong’o back to the stage to introduce the upcoming film Queen of Katwe. Set in rural Uganda, Queen of Katwe is based on the true story of a girl who dreams of becoming a champion chess player and will be released in 2016.

Beauty and the Beast 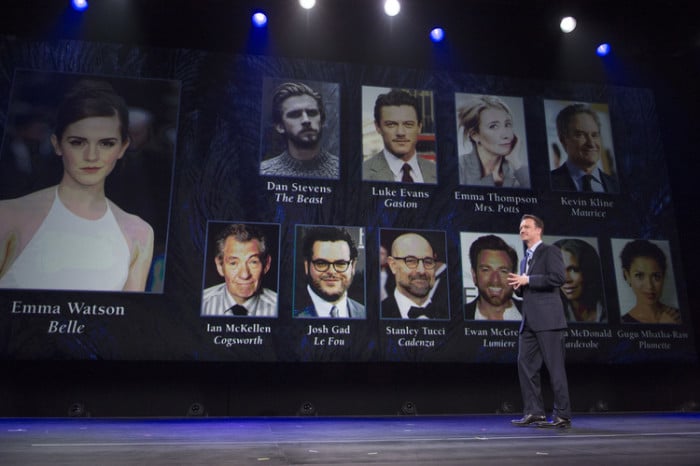 Words cannot express how freaking excited I am for the live action musical Beauty and the Beast. I wore my VHS of the animated version completely out. When I was in college. Do NOT do the math there to figure out how old I am. I stalked all of the cast announcements like nobody’s business. And can I just say that Josh Gad as LeFou is just about the most brilliant casting ever? Beauty and the Beast also stars Emma Watson, Dan Stevens, Luke Evans, Kevin Kline, Ewan McGregor, Stanley Tucci, Emma Thompson, Ian McKellen, Gugu Mbatha-Raw, Audra McDonald and newcomer Nathan Mack. The film includes two new songs from Alan Menken and Tim Rice! Insert lots of girlish squee-ing from me here.  Beauty and the Beast hits theaters on March 17, 2017-which is way too far away.

Pirates of the Caribbean: Dead Men Tell No Tales 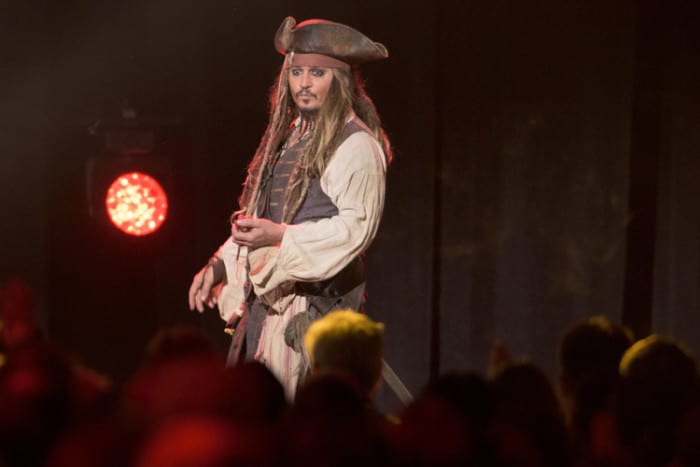 So, let’s talk Johnny Depp. I love him. A lot. I was hoping he might be at D23 EXPO, but didn’t really expect it. While we were sitting in the amazing Muppets panel, Johnny Depp was announced as a surprise Disney Legend. And I missed it. But in my mind, that meant he was in town and maybe he’d come out for the live action slate presentation. Then he didn’t come out for Alice and I assumed it wasn’t going to happen. 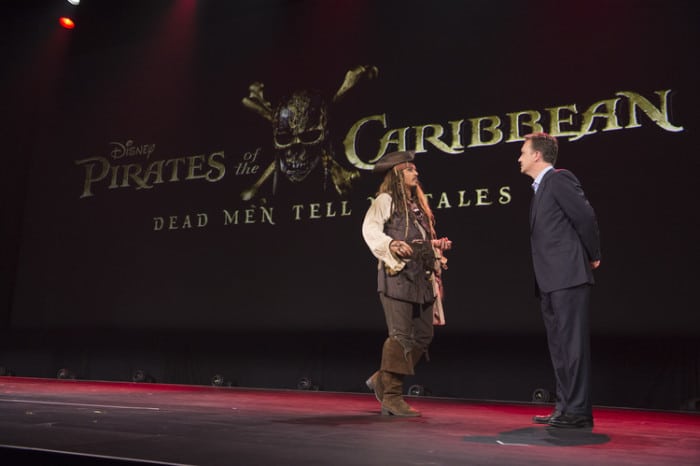 And I guess in a way it didn’t happen. Because that was full-on Jack Sparrow on stage the entire time. Never a break in character. So, in a way, even better. Totally better than that time the Jack Sparrow cast member at Disney World slammed right into me and almost knocked me down outside of the Pirates ride. I mean, if you’re going to get almost knocked down, he should pretty much be your first pick. But I digress… 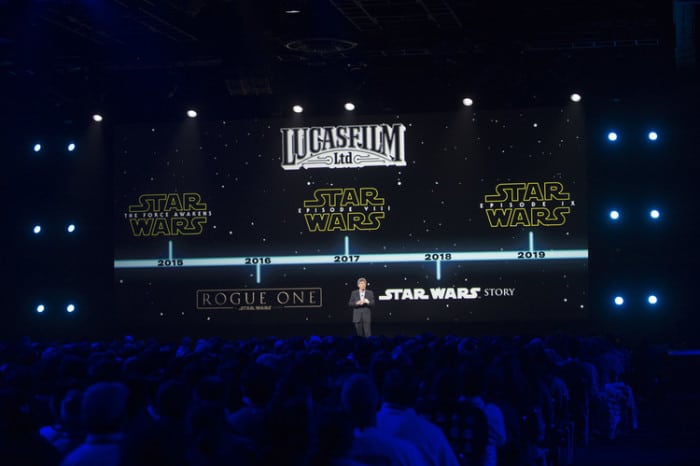 Alan Horn introduced the upcoming Lucasfilm slate. So. Much. Star Wars. So much. Ahhh…

Picture it. They begin to talk about The Force Awakens. They talk about the record breaking trailer. J.J. Abrams brings out stars John Boyega, Daisy Ridley, Oscar Isaac and Lupita Nyong’o. They tell everyone in the crowd they’re getting a D23 EXPO exclusive poster designed by Drew Struzan. And then there’s Harrison Ford on the screen, in the poster. And then they bring him out. The love of my life since I was 8 years old. I die. Again. 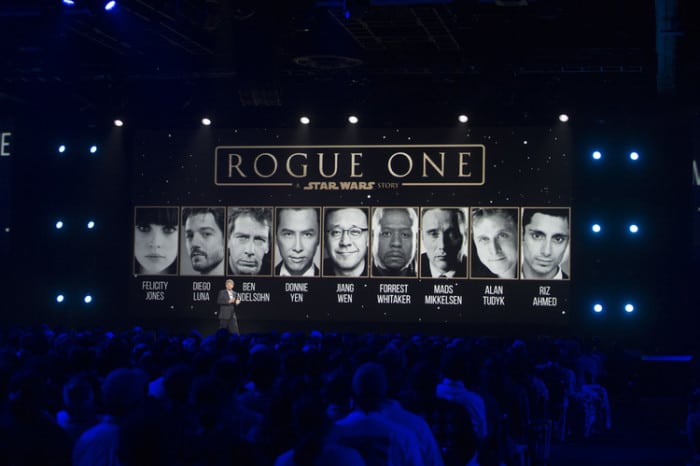 At D23 EXPO we also got a first look at the stars of Rouge One, the first standalone Star Wars story to hit theaters. 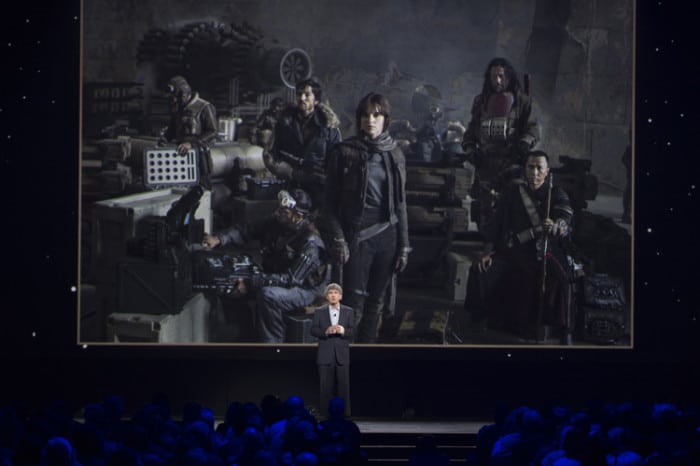 We also go a few brief annoucements about the other Star Wars projects coming up. Star Wars: Episode VIII will be directed by  Rian Johnson and is scheduled for a May 26, 2017 release.

Star Wars: Episode IX will be directed by Colin Trevorrow and will be released in 2019.

There was an amazing first glimpse of the major new Star Wars and Disney Parks news. You can read the full details on my recap of the Parks and Resorts presentation.

Oh, and let’s look at this just one more time before we go…