Thank you to Disney Studios for hosting me during the A Wrinkle In Time Event. 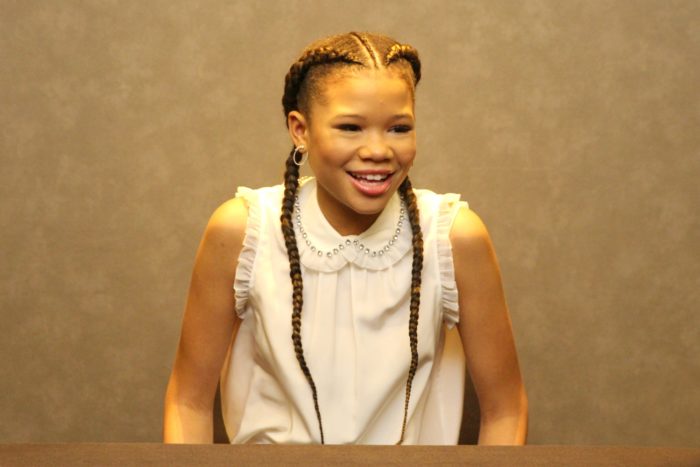 Storm Reid plays Meg Murry and Disney’s A Wrinkle In Time. A role she filmed at the age of 13. Just let that sink in for a moment. She stars in a game-changing, Hollywood blockbuster that she made as a new teenager. Getting the chance to talk with her about the film was an absolute joy!

What’s it like to play a character that will be an inspiration to a new generation of girls?

It means everything to me and it’s very empowering for me still as a young, little girl being able to represent the little girls that look like me and being able to give them hope and know that they can have any opportunity they wanna have and they can do anything no matter their big hair or their big nose, as people say, or their glasses or their skin tone. They can do anything. So, for me able to be that for them and be an inspiration and to uplift them and empower them in a time like this where everybody’s so divided and it’s so dark. It means a lot.

What did she learn from working with the Mrs in the film?

They’re all so great and I just learned from each and every one of them constant graciousness, because they are just so, so amazing and so empowering. And they’re these A-List stars, but they don’t act like it. And they are so grounded and so humble. And I just love them. And then Miss Oprah told me don’t waste energy on things you can’t change in life when you can be using that energy on something positive in your life. So, they’re just all so great and I’m glad that I have them in my corner to pour into me and just be around me, because they’re amazing women.

What was it like playing a “bad girl” version of her character in the film?

It was really fun, first of all, but I feel like it had a deeper message in that scene for me and for young girls not to conform to what society wants you to be and what society thinks you should be or how you should look, because you’re perfect just the way you are. And you have Meg, who is doubtful about herself and doesn’t love herself at the time. And you have this perfect version of her with this straight hair and this crop top and all these lil’ trinkets and who is really pretty and is cute. But Meg chooses herself over this perfect Meg, because she is realizing that she is enough and that she is worthy of being loved just the way she is. So, I feel like it was really fun to film, but it had a deeper message and I’m glad that I was able to kind of connect with that as a young teenage girl trying not to follow trends and trying to be unique and be myself. And also I feel like that will transcend to our audience, especially our young girls.

Did she learn anything about herself while filming the role?

I wouldn’t say I learned anything different, but I did learn that I am enough. And, of course, my mom taught me that and instilled that in me, and I’m pretty confident. But just being Meg and experiencing that and going through that journey with her where she doesn’t feel that way about herself and she has to embrace the light from within to become that, it really helped me do the same and really reassure that I was enough and that I am worthy of being loved, and I do have faults and challenges, but that can’t stop me. 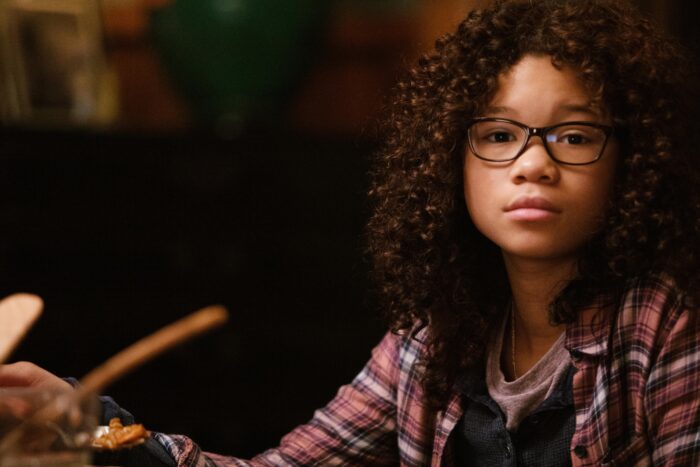 Storm Reid is Meg Murry in Disney’s A WRINKLE IN TIME.

So, thankfully my father hasn’t been missing for four years. So, that’s good. [laughs] With all the situations Meg is going through, I really had to step in her shoes and become that and kinda put myself in those situations. So, I had to just imagine my dad being missing for four years and I go on this tumultuous journey to try to find him, and put my life at risk to try to find him, and me walking into the room and seeing him there, I mean how could you not get emotional? How could you not feel that? And then Mr. Chris was just so great and he was so focused, and you could really tell that he had that connection as well with Meg and Dr. Murry. And it was just great all around. So, he helped a lot. And then just kinda stepping into Meg’s shoes and becoming her helped.

If she could tesser anywhere in the world, where would she go?

There are so many places. I think I would like to go the past, with my knowledge as Storm, as this 14-year-old girl, go back into the Civil Rights Movement and just see how I would deal with that and cope with that and with my knowledge now and see how I would deal with those things and come back and see how I could kind of change the future, because I feel segregation and inequality is still going on. So, if I could have that knowledge of how I experience that and how I could’ve changed that and come back here in times like this, that would be really cool.

What was it like when she told her parents she wanted to be an actor?

I started acting when I was three, and it was solely my idea. It wasn’t talked about it in my house and my mom wasn’t an actress. It was just my idea. So, I went up to my mom and I said, “I wanna be on TV and I wanna be a stuperstar.” And my mom was like, “What did you say to me?” We really both feel like it was my destiny and my calling to do, because not a lot of three-year-olds are walking around saying what they want do with the rest of their lives. So, she just really thought it was just God, and my destiny. And she, of course, took it seriously. And she’s like as long as I was taking it seriously and as long as I was having fun, then it was something that we could do. And thankfully I’ve been blessed enough to do so and be able to enjoy it. And it’s my love and my passion.

From visionary director Ava DuVernay comes Disney’s “A Wrinkle in Time,” an epic adventure based on Madeleine L’Engle’s timeless classic which takes audiences across dimensions of time and space, examining the nature of darkness versus light and, ultimately, the triumph of love. Through one girl’s transformative journey led by three celestial guides, we discover that strength comes from embracing one’s individuality and that the best way to triumph over fear is to travel by one’s own light.

Meg Murry is a typical middle school student struggling with issues of self-worth who just wants to fit in. The daughter of two world-renowned physicists, she is intelligent and uniquely gifted, as is Meg’s younger brother, Charles Wallace, but she has yet to realize it for herself. Complicating matters is the mysterious disappearance of Mr. Murry, which has left Meg devastated and her mother broken-hearted. Charles Wallace introduces Meg and her fellow classmate Calvin to three celestial beings (Mrs. Which, Mrs. Whatsit and Mrs. Who) who have journeyed to Earth to help search for their father, and together they embark on their formidable quest. Travelling via a wrinkling of time and space known as tessering, they are transported to worlds beyond their imagination where they must confront a powerful evil force. To make it back home to Earth, Meg must face the darkness within herself in order to harness the strength necessary to defeat the darkness rapidly enveloping the Universe.